Lately, I’ve been reading quite a lot of reports on the state and the future of remote work. While I think it’s great to finally see some open resources about what still looks a very underexplored field, I couldn’t find any unique insights or anything more interesting than some generalized polls or surveys. Yet I think we still know very little about this subject and there’s a lot to be uncovered in terms of strategies, frameworks, and models. This write-up (and more generally this blog) is an attempt to provide insights and more qualitative thinking on such topics.

If I had to pick one core belief upon we decided to start Pulse, it’s this one: context matters more than control. This write-up is going to be about what good context is, why is this is so important in today’s organizations and it’s going to be an absolute prerequisite in the foreseeable future.

Let’s back up before we dive into that statement and observe what context and control are on an individual level.

What is organizational context 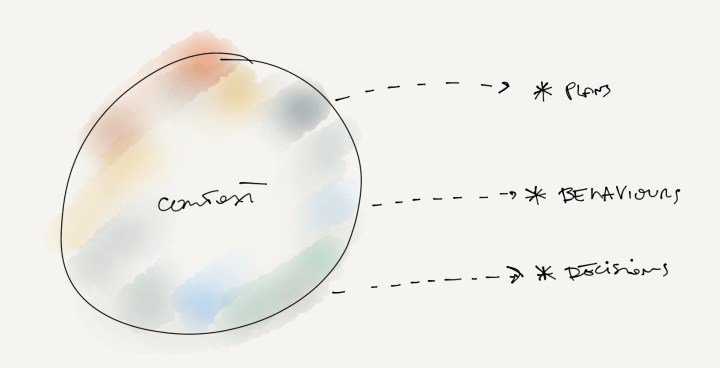 Context is built on two different levels inside an organization. On a global level:

Context almost happens naturally in small organizations composed of individuals who work in the same room and share the same desk. Once a company starts to grow, context is one of the first things to fall apart. Because of how quickly this transition can be, it’s not quite obvious for many when they have to start building it intentionally. Good context doesn’t just randomly happen – it’s actually the by-product of a very intentional plan.

What happens when context starts to fall apart? As opposed to context, to avoid chaos and enforce unity of directions, control is the ultimate counterpoint that allows humans to restore order and make sure things are done right. The absence of a surrounding context incentives control.

Context incentivizes individual autonomy and independent decision making
Control, on the other side, incentivizes centralized decision-making and high individuals inter-dependency

In most cases, it’s not a binary relationship – context and control coexist on a spectrum.

The more context is available, the less control is needed and vice-versa.

If the absence of context isn’t counterbalanced by a more controlled and managed environment, divergencies and team misalignments will start to come up. It’s clear how these conditions will eventually lead to individual conflicts and a toxic environment.

Back when Control was effective

Control has been for a half a century the most effective way to maximize an organization output. Prior to the Second Industrial Revolution, machinists were an unruly bunch, employing wildly, divergent customs and techniques even within the same facility. Beginners learned the skills from the people around them, taking on quirks, their tricks of the trade, and, of course, their flaws.

Given this artisan flair, productivity was a moving, unpredictable target. No one, machinists or managers, knew the boundaries of what was possible. 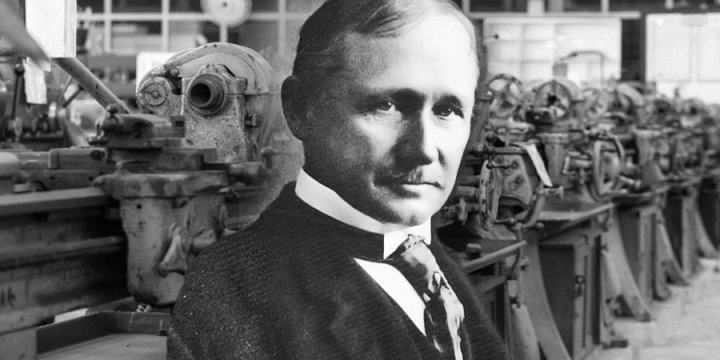 Taylor rigorously applied scientific reasoning for the first time in history to work. InThe Principles of Scientific Management,he stated his bigger innovation: break down each individual step to its smallest individual components and optimize for the best possible solution.

In Taylor’s time, foot dragooning and intentional inefficiency were so common there was a well-known term for it: soldiering. Back in those times, employers were known to cut piece rates – the amount they paid workers for each completed part – when productivity and wages go too high. Workers, on the other hand, limited their output to stave off any future rates cuts. Both parties found themselves in a standoff of predictable mediocrity.

To disrupt this dynamic, Taylor came up with a quiet counterintuitive measure. He raised wages.

He offered groups of workers as much as 15-30 percent wage premium to do a particular job, but they had to do it exactly as he instructed. Employees could decide to perform the job in their own way and get their old salary or do it at his exact standard and get the surplus. It turned out this worked very effectively.

All the following management techniques that came after Taylor, such as Fayol, Gantt, McKinsey, all shared the same bottom line: control over context.

Control as a way to maximize human effort worked for generations. At the beginning of the 17th century, control was the most important way to organize human labor and optimize productivity. 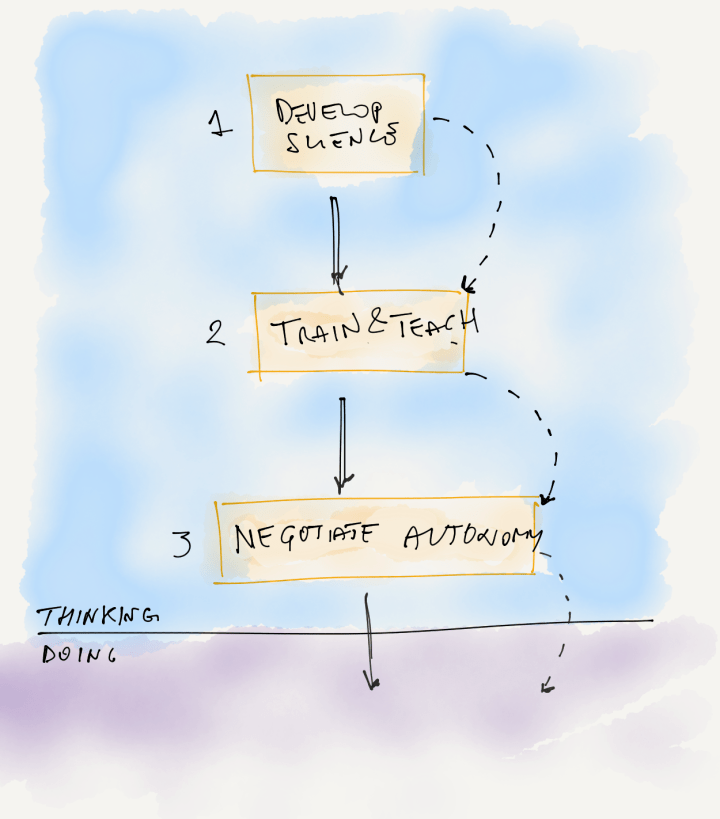 So, why is it the case that controldoesn’t work anymore? What’s actually changed underneath? Isn’t the case that human nature, after all, hasn’t changed much since Taylor’s time?

While it’s true that human nature hasn’t changed much, culture and technology have drastically changed. Control as a way to manage people worked under specific principles and particular conditions that do not necessarily hold anymore in today’s world.

In particular, I’m referring to:

Neoclassical economics says that factors of production are paid their marginal product. Add more workers and get the expected increased in marginal productivity until you get diminishing returns. But mental-cultural factors and rapid evolution actually make “marginal product” quite unobservable.

Control as a management technique held for centuries in environments where value capture and value creations were less contingent and more predictable. In today’s more unpredictable environments the same economic laws can’t explain much about what’s happening and the same management techniques that dominated that world are way less effective. It’s hard to believe Marginal Productivity theory can explain much about the complexities of modern work collaboration as it did years ago with employed blueberries pickers.

Control could work well in highly predictable environments, where solutions could be designed and optimized in a top-down fashion.

Workers are not manning an assembly line governed by a time clock. Many are engaged in leisure in the workplace and engaged in work while at home.

Workers are not interchangeable in terms of their skill level anymore. Instead, they are highly specialized. Summing up the hours worked by this heterogeneous labor force to calculate “labor input” is also a dubious exercise.

As we’re becoming more knowledge workers, skillsets are less interchangeable and way more specialized than ever before.

That means that for every single function in every company we have more field experts than ever. Hire them and tell them what to do and how to do, is the exact opposite of what you want to do as a leader.

That wasn’t the case years ago, where it was more productive for an organization to design and optimize for solutions top-down. Back then, the disconnection between thinking and doing was evident. Employees were trained to stick to plans and all the incentives where for them to give up their autonomy.

A good part of neoclassical economics is based on theExcludability of goods. Economics teaches you that all goods are rivalrous and excludable. If A obtains X, B can’t. (Actually, they teach that if goods aren’t rivalrous and excludible then it must be the case ofpublic goods.)
With the advent of the internet, goods are composed of bytes and excludability doesn’t hold anymore. Goods can be produced, distributed and infinitely replicated atzero marginal costs.

This implies that physical proximity is not a fundamental requirement anymore in the working process and people can collaborate on the production of goods by anywhere in the world.

It’s easy to control people when you’re physically co-located. When you’re not working with them because they’re working remotely, from different time zones, or different places, control isn’t applicable at all.

These are conditions that make me think that context building will play a critical role in the foreseeable future for any organization but it’ll be absolutely paramount to those organizations who aren’t physically co-located.

The implications of embracing a context-oriented organization are massive and this topic only might require another chapter. On an individual level allowing your team to make their own decisions has a number of benefits. It invests team more in the outcome. Having agreed with you on the goal, and having reached their decision to act on their own, the team is much more likely to continue taking steps on their own—without outside guidance—to ensure they reach the goal. This may include putting in extra effort, putting in extra time, and addressing roadblocks that come up without waiting to be told. In other words, a team with autonomy and context will operate in a more self-directed manner than one that lacks one of those two things. 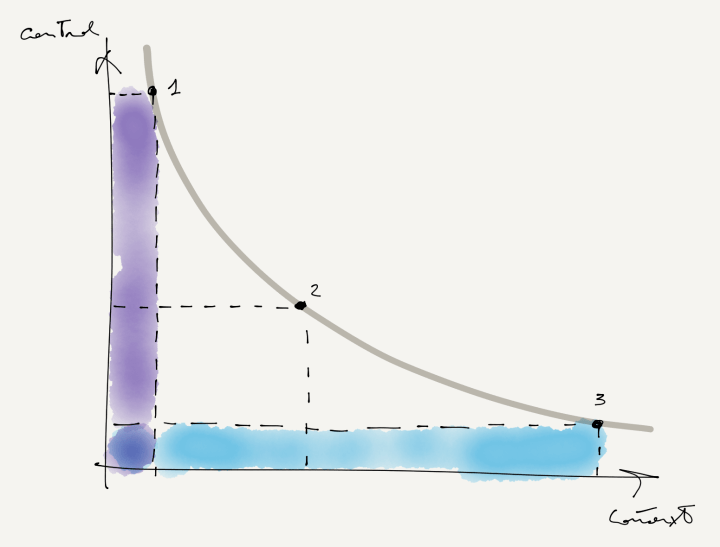 While writing this piece, I’ve come across the notorious Netflix culture deck.

Netflix is one of those organization who understood ahead of its time the importance of this shift so that they’ve codified it in their culture. Reed Hastings, CEO at Netflix wrote:

We strive to develop good decision-making muscle everywhere in our company. We pride ourselves on how few, not how many, decisions senior management makes. We don’t want hands-off management, though. Each leader’s role is to teach, to set context, and to be highly informed of what is happening. The only way to figure out how the context setting needs to improve is to explore a sample of the details. But unlike the micro-manager, the goal of knowing those details is not to change certain small decisions, but to learn how to adjust context so more decisions are made well. There are some minor exceptions to “context not control,” such as an urgent situation in which there is no time to think about proper context and principles, or when a new team member hasn’t yet absorbed enough context to be confident, or when it’s recognized that the wrong person is in a decision-making role (temporarily, no doubt).

As more and more companies are going to be remote-friendly and distributed, context will be paramount to their success. Yet very few organizations are deliberately developing these internal muscles.

I didn’t originally plan to write a series of write-ups, but it’s clear how this assumption is actually only the prelude to a broader topic. The implications of context-oriented organizations are observable on many levels: from organizational structures and network dynamics to many aspects of collaboration, and internal communications.