Once a startup achieves a basic level of product-market fit, the most pervasive problem becomes managing the organizational chaos that results from rapid growth. After the product is nailed, the founders' main focus becomes scaling the team - and everything that goes with it. Which often includes lots of hiring, onboarding, and communication to set the right operational cadence and the correct defaults.

During this time of chaos and disorganization, meetings are inevitably going to be one of the main organizing forces. However, it's easy to get them wrong and turn them into a detractor for the startup's net productivity.

This is a short guide on how to better navigate meetings for startups that want to maximize productivity and deep work.

Everyone says this all the time. And because it's good advice.

What not everyone says is "how small". Growth-stage startups (Series A or B) can range from 50 to 250 people. So how small meetings in these companies can realistically be?

Besides the monthly (or bi-weekly at most) recurring rituals that gather most part of the company employees such as leadership, all-hands, or town-hall, your meetings should have on average 3-4 people - with a peak of 7 people max on the largest ones.

While this has been scientifically proved multiple times, I usually find more interesting and helpful anecdotal evidence. 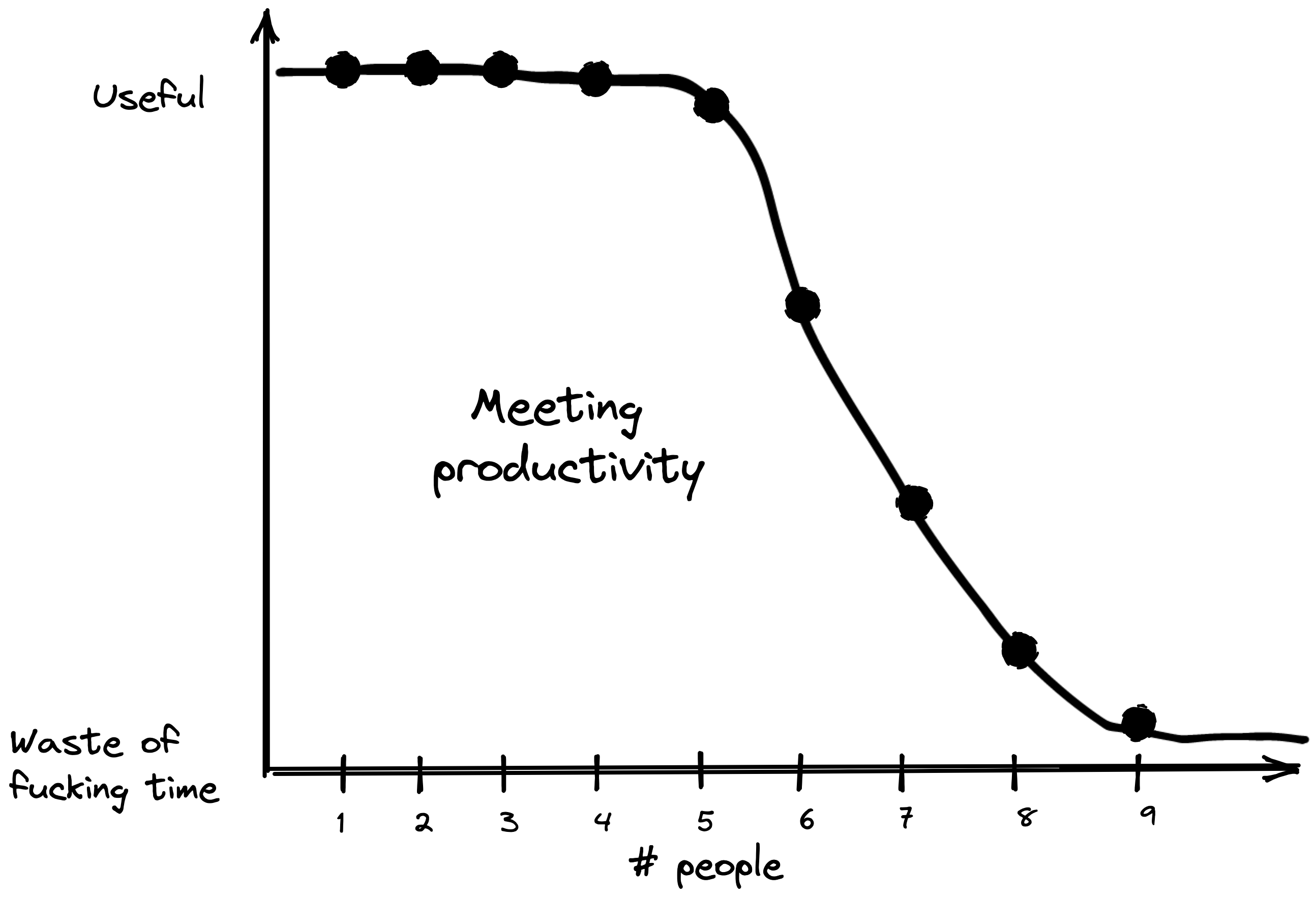 Speaking of examples, this is what Keith Rabois (former Executive Vice President of Paypal) wrote on their meeting culture at PayPal back in 2000.

David enforced an anti-meeting culture where any meeting that included more than 3-4 people was deemed suspect and subject to immediate adjournment if he gauged it inefficient. Our annual review forms in 2002 included a direction to rate the employee on "avoids imposing on others’ time, e.g. scheduling unnecessary meetings.

Bear in mind, this was pre-IPO and definitely before eBay's acquisition. Which happened respectively in 2001 and 2002. But if you're thinking that PayPal was too early in 2000, and 3-4 people were probably just enough, you're wrong. In 2000 they had 500 employees.

David Sacks on this Quora answer added more color to Rabois' comment and gave more insights on why "a meeting culture" is something to watch out for.

Hopefully it's obvious that an email culture is vastly superior to a meeting culture. A group of people can make progress on dozens of issues simultaneously by email in the time it would take to organize their schedules for a single meeting. Also, the quality of decisions made by email is frequently better because there's no arbitrary need to make a decision by the end of the meeting; people can respond when they are ready, and easily pull in additional participants and information as needed. What may be less obvious is that PayPal at one point suffered from a meeting culture. In the wake of the merger with X.com bank, PayPal had twice as many VPs as it needed (half were former banking executives) and was led by the former CEO of a big finance company, who set the example by holding excruciating hours-long meetings of the aforementioned execs. These management issues were eventually resolved, but the culture had to change as well. The crack-down on meetings was a deliberate attempt to restore the "true" startup culture of the company. It did not prevent impromptu collaboration or brainstorming sessions, out of which many of PayPal's best ideas came. The other reason to keep tabs on large meetings was that they could be symptomatic of an underlying organizational problem. For example, if a dozen people from product, marketing, sales, etc, are meeting to hash out international issues on a frequent basis, perhaps it's time to create an International team dedicated to solving these issues. Or perhaps people are meeting excessively because it's not clear who owns an area. By "popping in" on meetings occasionally, I got a feel for refinements that we should make to the org chart, such as adding new teams to cover unmet needs or re-defining roles to avoid overlap in job responsibilities.

I recently stumbled upon an internal email that Musk recently sent to all Tesla employees about meetings and productivity in general.

Excessive meetings are the blight of big companies and almost always get worse over time. Please get of all large meetings, unless you’re certain they are providing value to the whole audience, in which case keep them very short.

Every company is different but if some of the best operators in the world all agree that having meetings with more than 3 or 4 people is generally a bad idea, it's probably true.

Do meetings in 30min or less

Meeting quality is a bell curve that peaks at 30 minutes. 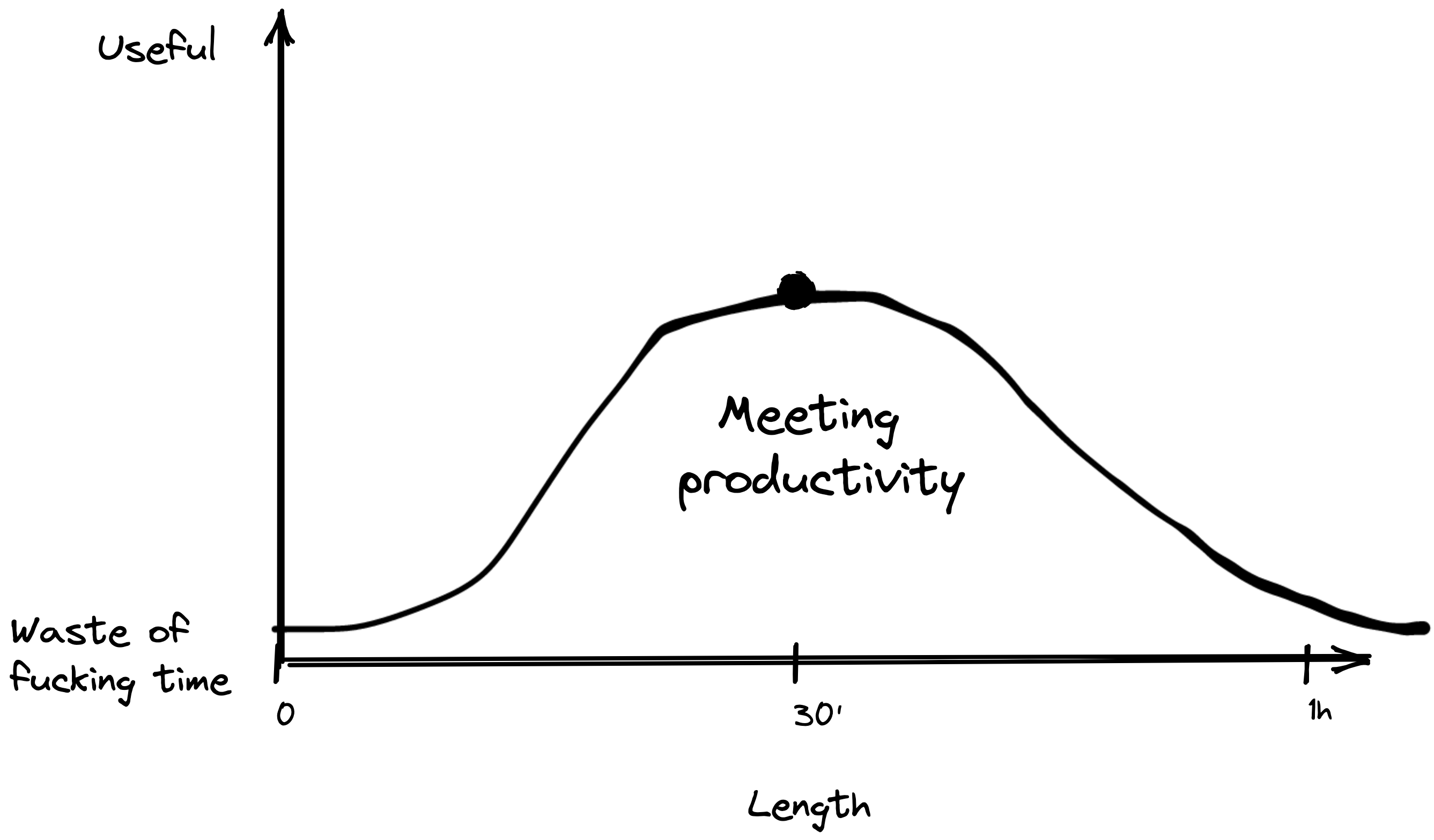 And if you're thinking that it's not enough time to hash everything out, then your agenda is probably too long.

This is a personal preference but I've found it more convenient to default to 25min meetings instead of 30min. In case the meeting exceeds I still have 5min of extra time to prep before my next calendar block starts.

Leave the meeting if you’re not contributing

What no one is going to say is that most of us define productivity based on our calendar. And meetings give many people the sense that they're busy and they're actually doing something.

This lack of discipline is a disease for startups. Startup meetings should require all attendees to actively contribute. If not, people should be instructed to walk out or quit the call as soon as it is obvious that they aren’t adding value.

It is not rude to leave, it is rude to make someone stay and waste other people's time.

Excessive use of made-up acronyms is a significant impediment to how an organization communicates. No one can actually remember all of them and people don't want to seem dumb in a meeting, so they just sit there in ignorance.

This is particularly tough on new employees.

Recurring meetings are like open tabs in your browser. Occasionally, they help you remember something important. But more often they simply consume memory and energy, reducing your ability to perform the most important task.

The key to approaching this is to periodically reevaluate all your recurring meetings:

Do the work after the meeting ends

A hilarious fact of corporate life is that we prefer smaller meetings while being quite certain that we should be invited to each and every one of them.

The reason for this is the lack of meeting infrastructure which makes meeting information transparent and legible to non-participants.

Make aggressive use of tools like Pulse (create a free workspace here) to make all your internal meetings automatically transcribed, instantly available, and available on-demand to your team.

You can get started in less than 30secs:

Create Streams for all your main internal meetings

Share here everything that’s related to the meeting. Video recordings, agendas, notes, or collaterals like slides or polls.

To upload a new meeting, simply hit New post then select Video. You can select the recordings from your local computer, Google Drive, Zoom, or even Loom.

After you post it, we automatically transcribe it for you. You can tweak the transcript and tag people as speakers.

If you want to automatically upload your meeting recordings enable the auto-sync feature and connect Pulse to one of your Zoom recurring meetings.

Pulse will automatically share (or save to your drafts) new meetings recordings as soon as they are available on the Zoom Cloud Recordings folder.

Keep your followers in the loop

Add people as "followers" to the meeting stream and keep them asynchronously informed. They can autonomously rewatch meetings, skim the transcripts and watch the highlights, and absorb what's truly necessary to them at their own pace.

And if they want to follow up with questions, they can easily do that with comments below the recordings themselves.

Automatically distributed via Slack or Emails

Meetings will be automatically distributed to your team via Pulse's Activity Feed, the browser new tab (if you install our chrome extension), simply as emails notifications or Slack messages (once you enable the Stream connection).

Making all your internal meetings, decisions, and updates legible and transparent is a crucial aspect to build a high-functioning company.