“We’re so bad at communicating!”

This is one of the most frequent lament I hear about orgs. And, to be honest, it’s not even that hard to understand why.

In an age where most business happens via written communication, most interview practices revolve around verbal communication and tend to favor the verbally charismatic.

We know that some people are better written communicators than verbal. And we certainly know that strong written communicators are more likely to thrive in any remote setting. Yet, our interview frameworks never changed. Even though the way we work has continually evolved, the practices that we use to assess and evaluate people have stayed largely the same.

This creates organizations with a poor written culture, highly dependant on face-to-face meetings, and more vulnerable to a culture of ephemerality over memorialized documentation.

Here I've jotted down some ideas and heuristics that I've found over the years and that can help you assess the written communication level of a candidate before you hire them for a remote position.

On the interview process

To evaluate someone's written communication skills, and the plausible fit for a remote position, you need to have some data points. And to do that you need a systematic way to gather those data.

Here's how to get started.

You can't understand if someone is a good written communicator on CVs, skills, and first impressions only. As cheesy as it sounds, the best proxy-metric is previous work experience in a distributed work environment.

Whether it's a first-hand experience in a remote-first company, notable contributions to open-source projects, or active participation in decentralized projects, it doesn't really matter. Whatever demonstrates that the candidate did some work on a decentralized team is typically a good predictor.

You can then ask if they could show a random internal document that they worked on. This depends on the role. For example, an engineer might have an RFC, a product manager some reports or status updates on the team's progress, and a designer the outline of feature proposal.

If the content includes sensible data you always ask them to strip-out references, names, or numbers.

The cover letter is likely to be your first objective data point to process. If in your application process for a remote position, you're not yet asking for a cover letter or some sort of "Why you want to work here?", I strongly invite you to do so.

In your application form, you should ask for any kind of long-form writing they'd published on the internet. This can be anything: blogs, interviews, personal newsletters, or even tweets.

It doesn't really matter the content because all you're trying to do is to see how they express their ideas in a written format.

The convention is that if the candidate is promising and passes the initial screening you assign them a take-home assignment.

Most people focus solely on the result. Was the assignment successfully completed - yes or no? Within the deadline - yes or no?

But if you're building a remote team you have to focus on the entire collaboration and coordination experience.

In fact, your primary goal is not to see if they're able to complete the assignment (although that's an important part) but to look at how they behave in a simulated working environment.

Are they stuck? How are they communicating that to the team? Are they on track? Are they making their work legible to others while they make progress? Are they sharing ideas and proposals as they move forward?

Regardless of the nature of the take-home assignment, the idea is to mimic the actual work environment so that you can get the most accurate signals.

There are multiple ways to facilitate this process. Create a private Slack channel (to handle sync) and a private Stream on Pulse ( to handle async) is the one that typically use.

On the principles to assess writing skills

If you've done all the above, you're at a point where you have enough data to process on the candidate. Now the question is – how do you actually evaluate them?

Here are the 3 things I look for to evaluate someone's writing skills in remote interviews.

Good writing is less about words and more about logic.

Most people can't write well not because of their linguistic register but because they don't know how to control the logical sequence in which they present their ideas.

You know it's a clear logical sequence when the relationship between the sentences and the paragraphs follow the structure of a why/how dialogue.

A great written communicator will inductively raise and answer questions until he reaches a point at which he judges that you (the reader) will have no more logical questions to follow up with. Vice versa, a bad communicator will deductively construct his arguments forcing you to passively reach out his exact conclusions.

Let me show you this in practice, first with a simplified example, then with a real one.

In the inductive example, the hierarchy of thoughts becomes more explicit almost like fictitious question-answer dialogue.

And now the real one: an exchange of emails between Mark Zuckerberg and CFO David Ebersman. Zuckerberg is asking Ebersman if acquiring ramping social media platforms like Instagram or Path is a good idea. 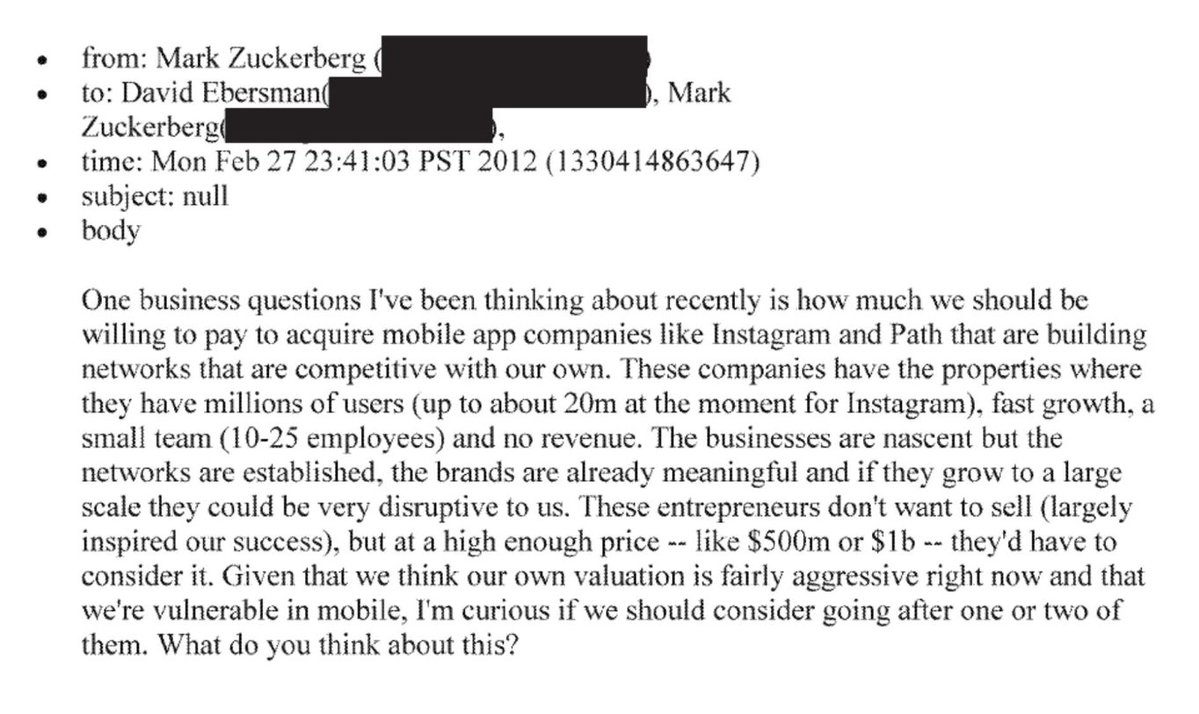 But let's focus on David's response. 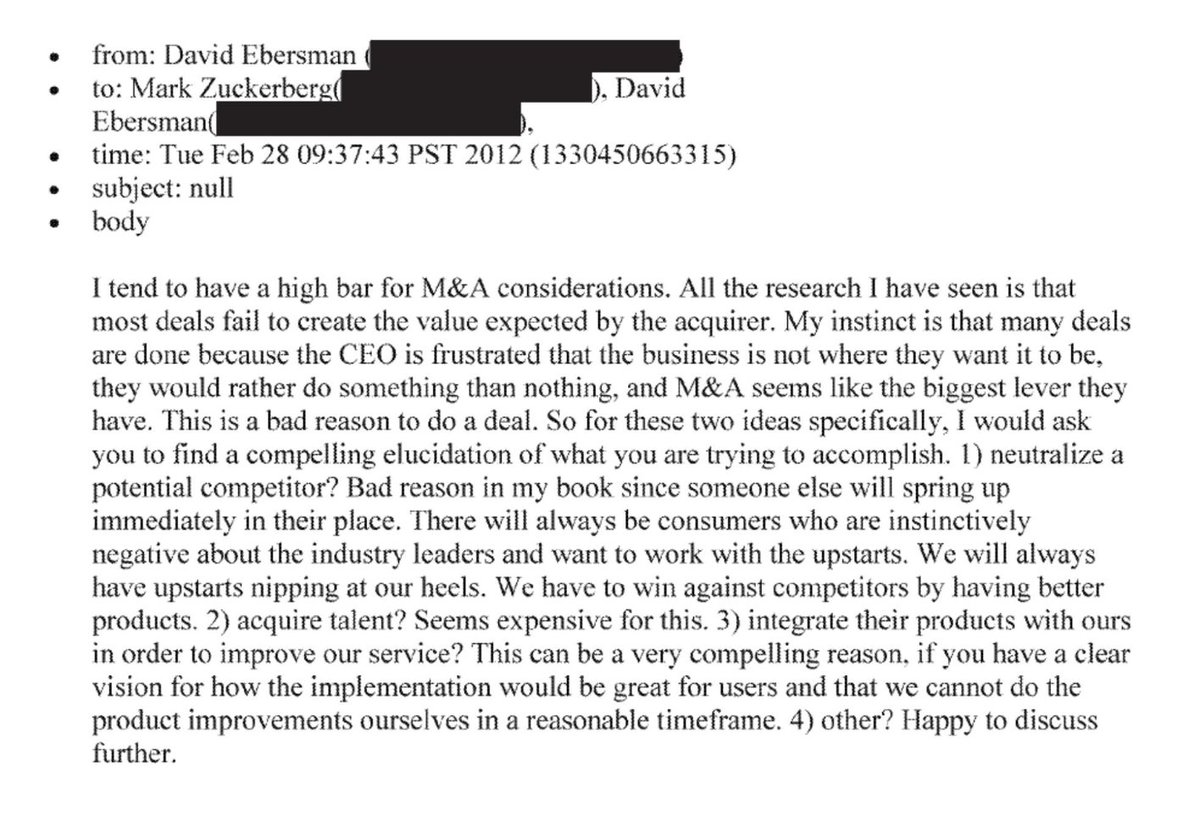 Let's break this down. 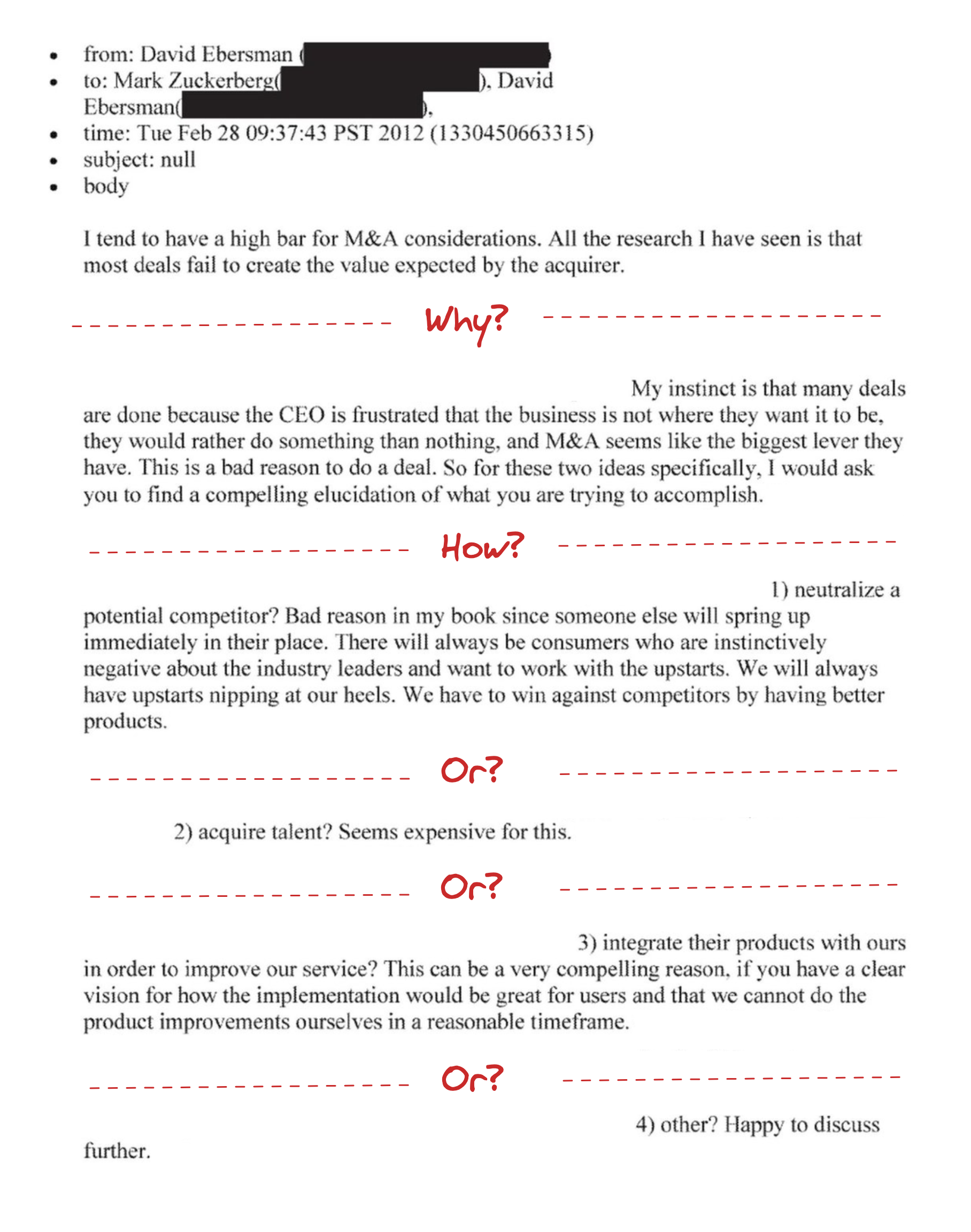 David starts with the gist of his reasoning. From there every sentence responds to the why or how question raised by the previous one. To the point where there are simply no more questions left.

What's David is really doing here, is reproducing Zuck's thinking process using his own brain. And while he's doing that, he builds up information in a way that feels logical and makes sense – not really to himself – but to Zuck.

2. Sart from a shared baseline

Have you ever been in a meeting with other people, thought you reached a shared conclusion and some clear next steps, only to find later that all of you left with a completely different understanding?

We all have our own unique way of interpreting the events taking place around us. Acknowledging this dynamic is critical in your writing to ensure your readers are all starting from the same baseline with the same context.

3. Make use of tension words

In real life, things work much differently. People have short attention spans and - above all - they don't care about what you say. You're writing in exchange for time and/or money and you have to be conscious not just about the value you're giving but also about "how" you're delivering it.

This is an example of Steve Jobs' letter on Flash: 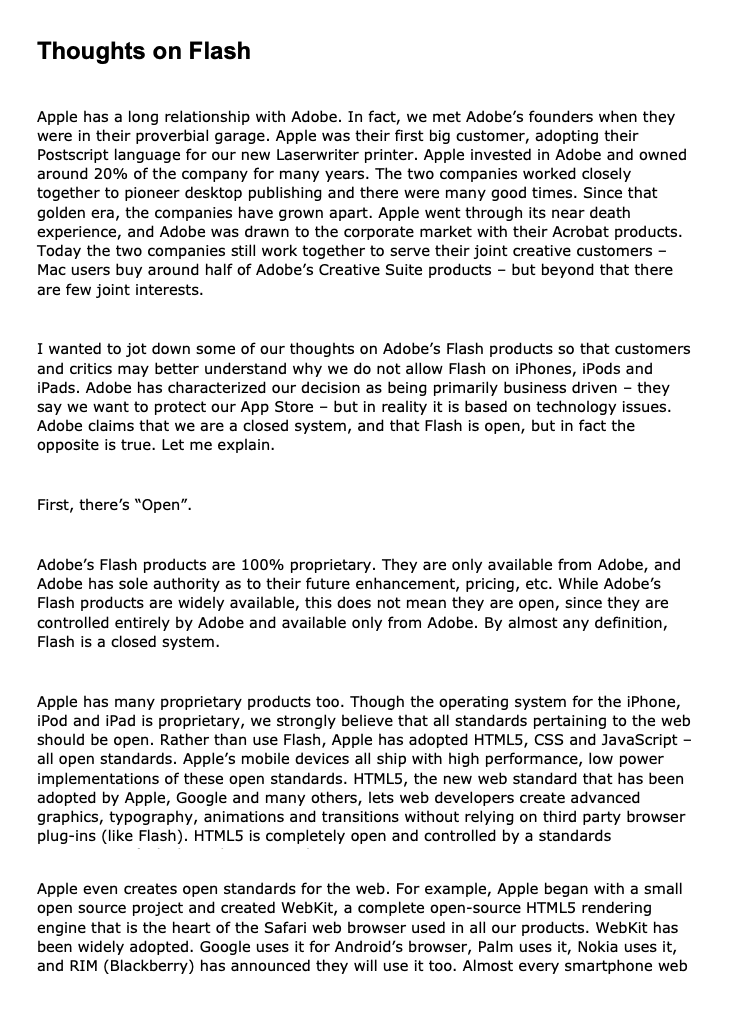 Now pay a closer look at all the tension words he uses just in the first few paragraphs. "But", "grown apart", "near death experience", "do not", "but in fact", "the opposite is true", "does not" and even the ironic "Open", are all there to create tension and somehow destabilize the reader. 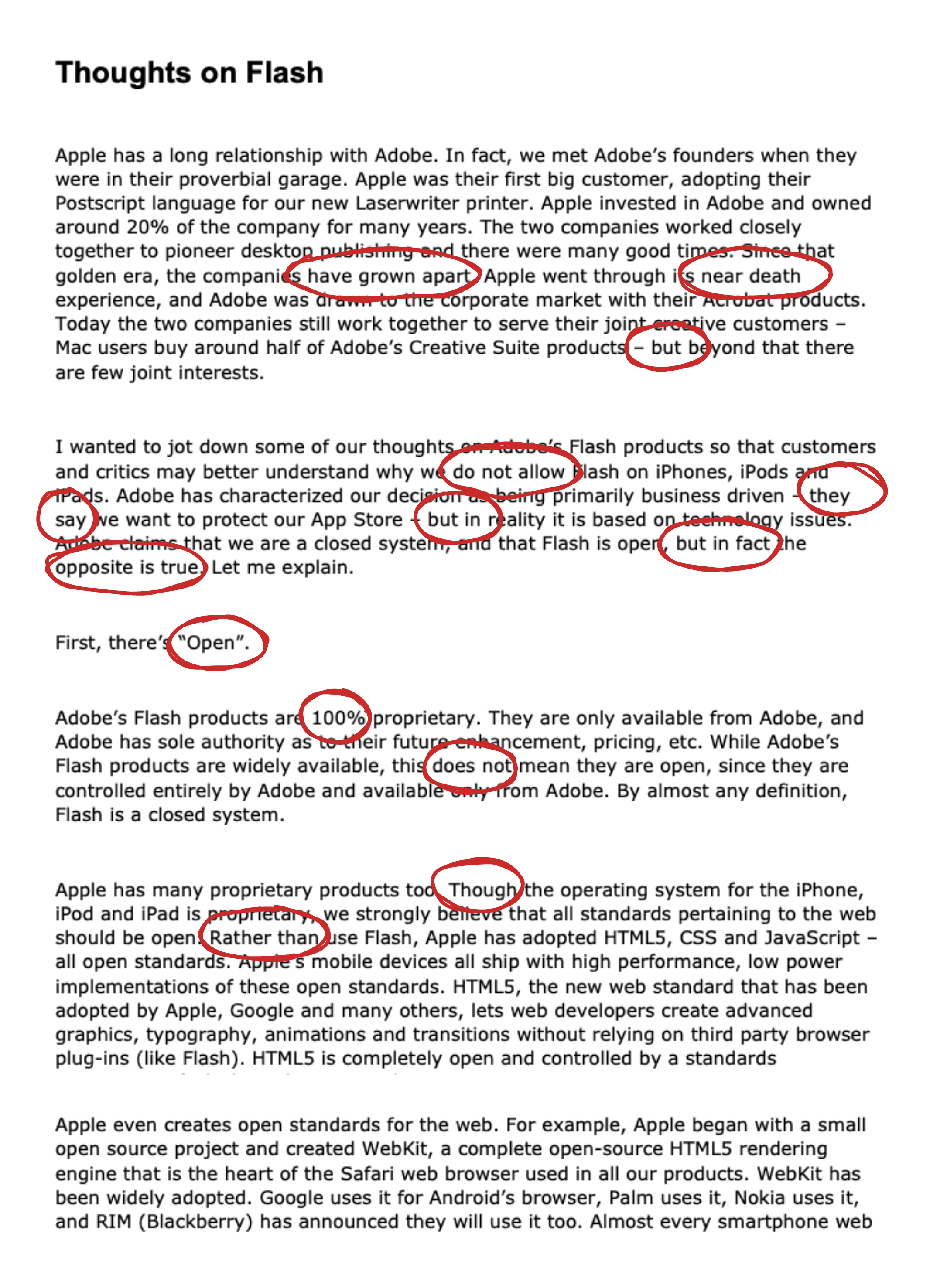 Next time you read (or write) something, try to circle all the tension words you can find. And if you don't see many, just add more of them.

On the opposite side, these are 3 things that I pay less attention to:

These are not inherently bad advice, but there's nothing wrong with long sentences and passive voice.

It's a stylistic choice, and some writers would have argued - that it was even a good one.

Nobody will ever be enthusiastic to read your wall text. And many will find annoying the lack of proper formatting. But it's the last of your problems and the easiest thing to fix.

Obviously, grammar is a fundamental aspect of all writing, but if you're hiring for positions that don't require perfect written English or a native person, then it's probably something that you can overlook as long as the candidate gets the hard parts right.

One of the hidden assumptions in "hire people that write well" is that people who write well would also likely have high reading comprehension skills. Vice versa, the ones who want to jump on a quick call instead of writing out their requests are the same who seemingly don't read the other's people documents.

The ability to quickly read and process docs, plans, schedules, calendars, agendas, minutes, and memos is how you excel in remote environments. With 20 minutes per day, you can have the entire organization's "state" modeled in your head.

Before hiring someone, consider whether you’d like to have 10 times as many people like them in your company. Because they will hire people in their mold.

It's true. People hire like-minded people. Your first few hires are going to have a much greater impact on the rest of your company.

If you're building out a remote team look for strong written communicators because they will seek out the right people for you and that will be the bar everyone needs to clear.